According to George Polya “A great discovery solves a great problem but there is a grain of discovery in the solution of any problem. Your problem may be modest; but if it challenges your curiosity and brings into play your inventive faculties, and if you solve it by your own means, you may experience the tension and enjoy the triumph of discovery.” In this post I will share my two such experiences. 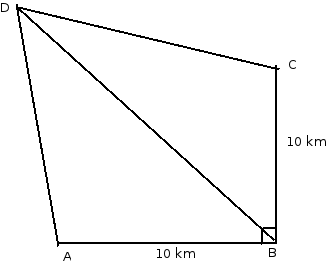 I solved the problem using half angle formulas. It took about 4 pages. The numbers involved were so big that I have to do them by hand as they were beyond the scope of the calculator. In the end I found two answers. One was proved to be extraneous solution. The answer was between 38 and 39 km/h. I put up this question as a challenge to my class during my BE Avionics. No one solved it.

During my teen years a cousin of mine showed me a shorter version of a year calendar. The main theme of the calendar was that if we ignore the number of days in a month then there are seven possible months. At left days from 1 to 31 were written with the gap of 7 days. On right side the seven combination of the days of the week were written. Above them corresponding months were written. For example in non leap year the months of September and December will start on same day. Same holds true for months of February, March and November. For leap year the months after February are off by one day and the combination of months is bit different. Alternately we can offset January and February.

The criteria for leap year for century year is divisibility by 400. For example 2000 was a leap year and 1900 was not although it is divisible by 4 but not by 400. My father brought a perpetual calendar that was in sheet of paper. I observed that there are 4 possible centuries not 7 due to the above mentioned criteria. I made my own perpetual calendar. In it two dials were rotated according to some rules to determine the calendar of a month. It was done by all my own imagination.

During 2009, I became convinced that the world would end in 2012. I tore both the solution to the trigonometric problem and the perpetual calendar. If I had time and energy I may recreate the calendar in future.

2 thoughts on “Joy of Discovery”

My Book at Amazon